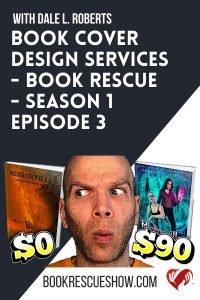 His covers certainly weren’t the worst I’ve seen and considering that he was designing them himself with just his iPhone 6S, they are phenomenal.

Even so, we can do better by hiring some book cover design services to give Robert’s books a professional edge.

What We Learn About Robert in This Episode

You may have been scratching your head and wondering why Robert doesn’t just go out and get a job. It seems like something that could help with his struggles. Things aren’t always as they seem.

In this episode of Book Rescue, Robert reveals that he has a lesion on the frontal lobe of his brain. When I asked Robert what was his greatest struggle in life, this was his answer.

He said it’s caused him a lot of heartache over the years and he has to take medication to keep it under control. I could tell he was reluctant to share about this because he doesn’t want sympathy, but I let him know he’d get only understanding from my crew.

This is just another aspect of Robert’s spirit that I find so endearing.

He understands that we all have struggles, and this is his.

What is a Brain Lesion?

I consulted WebMD to provide a little more insight and awareness about Robert’s condition.

A brain lesion is an area on the brain of damaged tissue. They can be caused by a number of things such as injury, infection, immune system issues, and more.

There are also different types of lesions:

Ultimately, what we learn about Robert in this episode isn’t about his brain lesion. It’s about his resilience. Although it’s difficult for him to maintain a job or even function at all sometimes, he keeps moving forward through adversity.

He said, “Look at this way, even if I could go back in time and change things where it never happened, I wouldn’t because I am who I am because of it. Everything that happens in life forms us in some way or makes us who we are. I’m not going to change that because, despite everything I go through, despite all of the flaws, I like the kind of person I’m turning out to be, and I just want to finish the journey and see what happens.”

Right on, Robert! This kid has heart beyond measure and a spirit that never dies.

If you recall, this was also true of Thomas in the Pilot Episode of Book Rescue. I find these stories incredibly inspiring, and I hope that you do too!

Book Cover Design Services REVEAL – This is my favorite part of a Book Rescue!

Again, we hired OliviaProDesign over on Fiverr for Robert’s covers, and he wrote out the most detailed briefs I’ve ever seen. I think that detail landed him some amazing book covers that were exactly what he was looking for.

I have to say this reveal was so satisfying! Robert’s enthusiasm was exciting and infectious.

One of the hardest things about hiring book cover design services on Fiverr is knowing that you’ve got a winner and you’re not going to end up with a cover that looks like a page out of a 3-year-old’s coloring book.

I think a lot of self-publishers moved away from Fiverr for this reason, but it’s easier than ever to vet and find good services. Have a look at our curated list of vetted freelancers!

What’s Next For Robert

There are 3 episodes left to Robert’s story. We teased the next episode at the end of this one which will be the reveal for Robert’s website and other assets created for him by Author Brand Kits.

I’m very much looking forward to that and I hope you are too!

If you’d like to make sure that you don’t miss future episodes, please consider subscribing to my YouTube channel.

I’m on the lookout for future Book Rescue candidates! If that’s you, you can apply here.

I’m glad you’re here and if you made it this far, I’d love to hear from such a stellar audience member. Holler at me in the comments below!

This site contains affiliate links. When you purchase through these links, we will receive a small commission at no extra cost to you. We appreciate your support.