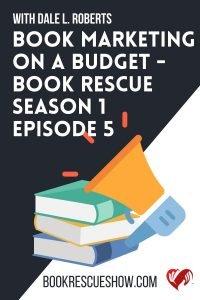 In Season 1 of Book Rescue, we’ve been working with Robert G. Culp, a young adult fantasy author with some challenges.

Robert has 5 books. He wrote them all from his iPhone 6. I can’t imagine that alone, much less doing that with a brain lesion, seizure disorder, and no budget.

Robert’s unwavering spirit caught me right away, and in this episode, we’re going to be book marketing on a budget.

Before we jump in, you’re going to notice that each Book Rescue candidate has a different set of circumstances they are dealing with that are ultimately hindering them from selling more books.

With Thomas, it was a job lay-off, spinal stenosis, and muscular dystrophy. With Robert, it’s been his lack of tools and budget, besides some pretty challenging health issues. Next season, well, you’re just going to have to stick around to find out! I can tell you, you don’t want to miss it!

Just to recap when we started our journey with Robert last year:

Now that Robert is ready for the world to see his books, how do we get them into more hands?

A Three-Pronged Approach to Book Marketing on a Budget

First things first – one of Robert’s weakest areas was the lack of third-party credibility. He had no reviews on his titles and very little presence on social media to speak of. No one was talking about Robert or his books.

In the Amazon Advertising Certification Course, I learned a product isn’t truly retail ready until it has 15 reviews with an average of three and a half stars or greater.

This was going to be tough. Amazon reviews aren’t just something you pull out of your back pocket.

I set him up with a service called GetBooksReviewed.com.

When you set out to get book reviews, be careful! Amazon doesn’t play around with fake reviews or swaps. They will ban you. I speak from personal experience, so I’m only going to share legit information for obtaining reviews.

Next – I got to thinking that Robert’s books must be decent if he landed that many reviews right out of the gate. I mean, these were people who had to select his book from a list of books to read and review.

What if I could get Robert some more credibility that he’s so rightly earned through perseverance, grit, and sheer determination?

I connected Robert with my friends over at BookAwardPro.

A lot of authors don’t realize that book awards can play a huge part in book marketing and it’s a great way tot connect with your readers and fanbase.

They also gave Robert one full professional award submission and a boost he can use at any time.

Finally – It was time to take action.

I got Robert connected with Evan Gow of StoryOrigin.

Evan gave Robert a year of the standard plan free and access to some promo to really help him build his email list and find more reviewers for his books.

A friend also reached out after the first two episodes of this season in hopes of working with Robert as well. That friend is Jonny Andrews. Jonny is an online business strategy consultant and OG self-publisher dating back to 2006.

Jonny’s company, Author Platform Rocket has helped thousands of authors scale their businesses into full-time incomes. He saw something in Robert and agreed to work with him at no cost.

Jonny asked Robert to compile a list of 2,000 influencers, groups, and website that could help him elevate his brand, so on his next book launch, people would know who he is.

We had no sooner gotten off the call with Jonny than we received word that Robert won an award.

It was a pivotal moment.

Regardless of our efforts here at Book Rescue and what we set out to do for Robert, one thing that nobody will ever be able to take from him is the fact that he is an award-winning author!

Just to put it in perspective, Robert wrote THREE novels on an iPhone 6. He then compiled those three novels into a trilogy called The War of the Beast, and that became an award-winning book. How cool is that!?!

As My Time with Robert is Winding Down…

I gave him an assignment to do his first newsletter swap on StoryOrigin. He and I also ordered a cover for his reader magnet from Olivia Pro Design on Fiverr. She’s the same freelancer who has done all of his covers.

To see a list of all of our vetted sellers on Fiverr, check this link.

As this season of Book Rescue winds down, Robert has no idea what’s in store for him.

Jonny Andrews engineered a massive giveaway to fuel the momentum of tons of readers for Robert. You’ll see that in the finale.

Also, Robert gets some life-changing news. You will not want to miss the Season 1 finale of Book Rescue, so stay tuned! Also, we’re already filming Season 2.

If you’d like to support Book Rescue, you can do so at no cost with your likes, shares, and comments.

Do you think you’d make the perfect candidate for a future season of Book Rescue? You can apply here.

This site contains affiliate links. When you purchase through these links, we will receive a small commission at no extra cost to you. We appreciate your support.